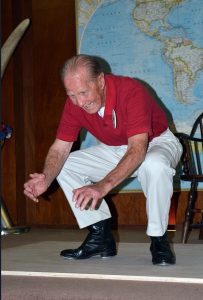 Sidney “Sid” Hallburn, born in San Francisco on November 13, 1923, is of Swedish, English and Chinese heritages. His father served in the US Navy, chasing pirates, and his mother was from Hong Kong. Having moved to South Gate, Sid learned how to tap dance from Ethel Meglin, teacher to such greats as Judy Garland, Shirley Temple, and Mickey Rooney. Sid became a backup for the Little Rascals. He received ukulele lessons from Bill Tapia. In high school, Sid was active in sports and joined the boxing team. For the American Red Cross, he taught life guard instructors in swimming and rescue procedures. At the outbreak of WWII, Sid joined the US Army, entered OSS training and learned self-defense techniques. Sid and his special forces team were set to join the war on the Italian front. However, due to a serious cut and injury to his leg, the effects of which linger to this day, Sid was left behind. All of his buddies were killed in action. “Somehow God was watching over me”, Sid believes. Sid transferred to the US Air Force where he taught pilots how to shoot 50 caliber guns in air-to-air combat. Sid attended Compton College, Pepperdine and USC, earning a Master’s Degree in Education, and he enjoyed a 35-year career, teaching physical education (track, football & wrestling). He was a mentor to many handicapped students and gang members, one who threatened to kill him. Married twice, Sid says his first marriage didn’t last long because “we rushed it”. Sid and his second wife, Lois, raised two sons and a daughter. Alas, a medical error took her life at a young age. Sid fondly and poignantly recalls, “We never had a fight”. Sid is a proud grandfather of five. Sid faithfully volunteered at the Veteran’s Memorial Hospital at Long Beach, having served 17 years and counting. “If you saw what I see at the hospital, no one would ever complain”, says Sid.