Roy Roush, Member #864, was a Marine during WWII, a recipient of a Purple Heart, an Air Force fighter pilot during the Korean War, a prospector, treasure hunter, a teacher, the holder of a doctorate of archeology, a technical consultant for aircraft manufacturers. He was a man of many parts. He was proud of his membership in The Adventurers Club and attracted many new members. Roy was born in Alva, a small county seat town in north-western Oklahoma, during the time that his grandfather was serving as a State Senator in Oklahoma City. He attended school in Oklahoma City and high school at Enid, Oklahoma. Between school semesters, he turned country boy – spending his summers on his grandparent’s farm in southeastern Kansas where he hunted, fished and learned about the great outdoors. His main companion was his German shepherd dog and his .22 rifle. He would have graduated with the class of 1943, except that he had left the year before to join the U.S. Marines – hopefully to be accepted for pilot training. However, he was assigned as a Browning Automatic Rifleman and served on the front lines of the four major campaigns of Guadalcanal, Tarawa, Saipan and Tinian in the South and Central Pacific areas, and was only one of four Marines left in the original company after Tinian. Following an honorable discharge in July 1946, after four years with the Marines, he attended Oklahoma A&M College (Now Oklahoma State) at Stillwater, and received a B.A. Degree in Journalism. Later, he obtained a M.A. and a Ph. D. in Archaeology. 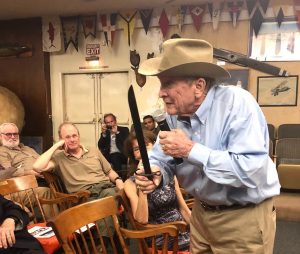 After finishing college in 1950, he joined the U.S. Air Force during the Korean War, and became one of our early jet fighter pilots when he graduated from the Jet Fighter School at Williams Air Force Base in Arizona. Then, he attended the Air Force’s Top Gun School at Nellis Air Force Base at Las Vegas, Nevada. During the last week there, the engine of his single-seater, F-80 jet fighter exploded and caught fire just after take-off, resulting in a crash landing in the open desert. (Jets at that time had no ejection canopies or ejection seats!) Previously, such incidents had always been fatal, but he survived with a severe compression fracture to his back and other injuries. He received a letter of “Well Done” from the Air Force for this accomplishment. After four months of hospitalization, he was transferred to the Air Defense Command, where he finished his tour of duty flying numerous other jet fighters, including F-51 Mustangs and B-25’s in Wisconsin and Minneapolis. He flew commercially after moving to Los Angeles in 1956, and also spent 25 years writing Pilots’ Handbooks for major aircraft companies there. His hobby including treasure hunting, archaeology, gold prospecting, and flying. Photos of Roy Roush at the Club on DiverKevin