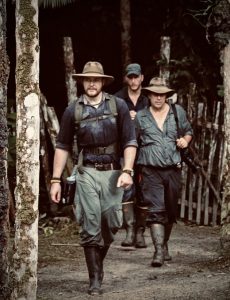 In October of 2018, I carried Flag #123 to the border of the Vale do Javari Indigenous Reserve in the depths of the Brazilian Amazon. The research team I had joined was conducting a multi-part anthropological survey of the rarely contacted Matis Tribe who call the reserve home. Forbidden to outsiders, and encompassing a territory roughly the size of Austria, the reserve is home to the largest concentration of uncontacted tribes left on Earth. Within this wild frontier of tribal turf wars, illegal logging and mining operations, evangelical missionary efforts, and thinly spread government agencies, the team met with a delegation of the Matis tribe as they continue their tumultuous integration with the outside world. Throughout the trip, I served as the expedition’s artist and my sketches of tribal activities were of great interest to the Matis who often gathered around to watch me draw. 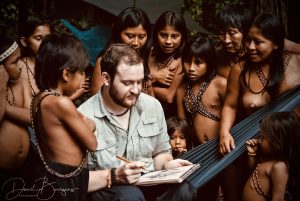 The Matis speak a Panoan dialect, that first had to be translated into Portuguese and then to English. During our evening discussions with tribal elders, they told us about their spiritual beliefs as well as the story of how they made first contact with the outside world in 1975. They also allowed us to accompany them on some of their hunting and foraging excursions. Their diet primarily consists of monkey, hunted with curare tipped darts that cause almost immediate respiratory failure. Many aspects of Matis life are gendered, and the construction of their 14-foot blowguns as well as the rendering of the deadly poison are exclusively handled by each man, individually. Younger men and children accompanied the hunting party and assisted with climbing up to retrieve any carcasses caught in the canopy and carried the day’s quarry back to camp.

Several team members, including myself, also participated in a variety of sometimes painful, Matis rituals. Before one of our hunts, we joined the men in having juice from the ground bëcchëte root poured into our eyes. The extract supposedly helps to spot prey in the thick jungle and there is some scientific evidence that it does effect the user’s ocular nerves and color spectrum. However, it does burn the eyes and temporarily blurs the user’s vision. As it burned, we were told to say the names of the fastest animals in the jungle while rubbing our knees and ankles, (a type of self-blessing or prayer for the hunt to come). The next ritual began with one of the tribal elders going down to the river, covering himself in mud and leaves, and donning a red clay mask that mirrored the unique tattoos and facial piercings worn by the Matis. He would then creep through the jungle brush, embodying the spirit of the “Marawin,” described as a type of all-encompassing life force. The silent spirit emerges and then tribal members, including the women and children, take turns getting whipped with long reeds. The only requirement is to neither react nor show pain, and while we were only whipped two or three times, we were told that sometimes tribe members would receive fifty of more lashes to toughen their bodies and their spirit for the harshness of life in the jungle. The same holds true for the ritual tattooing, often done on the face of both men and women, but in our case done on the arms using long thorns and ink rendered from tree sap. We were again told that the tattoos and their number had no specific meaning, other than to indicate how tough the bearer was. 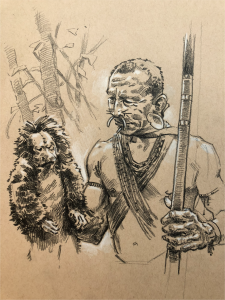 Finally, we underwent the ancient healing ritual known as Kambo, which ironically has already made its way from the depths of the Amazon jungle to “spiritual healers” in Los Angeles. Early one morning, in the pre-dawn darkness, we set out to find giant monkey frogs. Once captured, the women of the tribe tie them by their wrists and ankles and stretch them over hot coals, causing them to secrete a toxin from their skin; a natural opioid that is 40-times stronger than morphine. We were then burned with smoldering reeds until a blister formed and was then removed. The poison was applied to the raw skin beneath, causing almost instant sweating, shaking, vomiting, and an increased heart rate. The team medics described the process as a form of shock and one team member passed out, falling backwards off of the log, and briefly convulsing. In comparison, I only suffered mild side-effects but did not enjoy any of the supposed healing benefits. 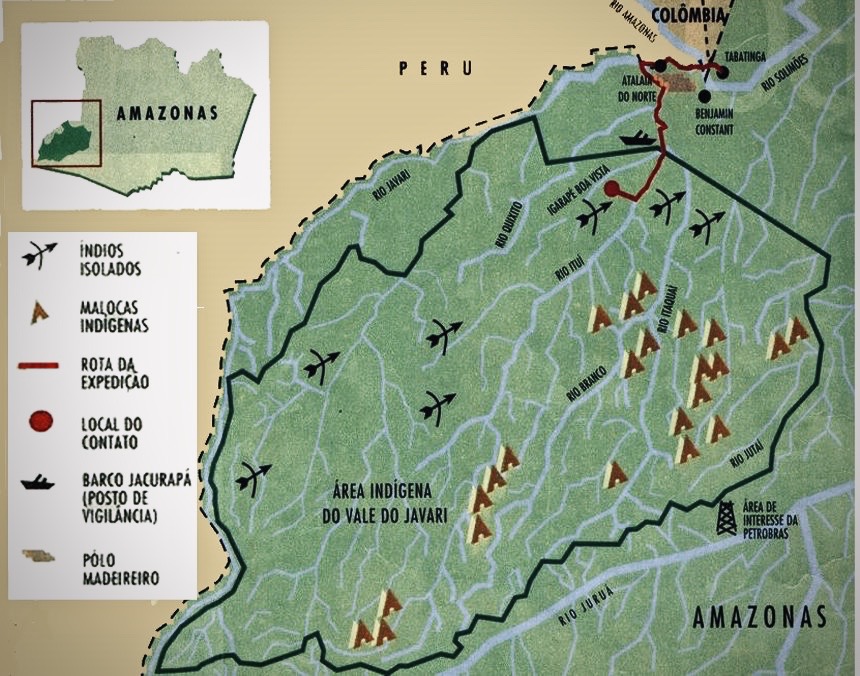