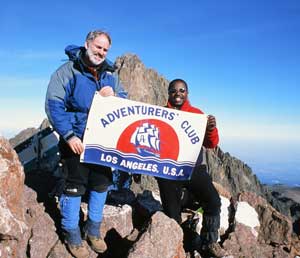 The first photo was taken at the top of Mount Kenya ‘s Point Lenana at 16,355 feet along with Maasai Warrior Moses Pulei and the other is with me in front of UC San Diego’s Health Center after I received a double lung transplant, which took place on July 21st of this year. After summiting the highest point in Africa, Tanzania’s Mt Kilimanjaro at 19, 341 feet, David Dolan #1087 looked for other East African challenging mountains to climb. An opportunity developed for him to climb Mt. Kenya with three members of East African tribes, including representatives from the Maasai and Kikuyu Tribes. Following a rugged summit route that’s rarely used, Dave and his climbing partners enjoyed pristine wilderness that avoided other climbers, although they had a run in with a pack of wild foxes that made off with much of their food, forcing them to speed up their descent following a successful summit day, which put them in a more dangerous predicament. In addition, Dave learned the wisdom of the Maasai on dealing with death during this journey from Moses as he lost a friend and mentor to a plane crash just prior his departure from California and this climb brought healing and catharsis to Dave as he dealt with his loss. 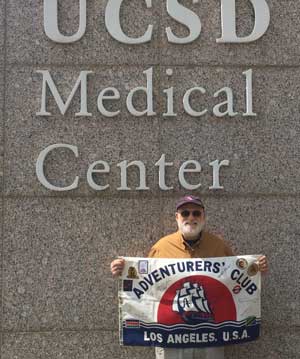 On July 21, 2013, Dave’s older brother Robert died at USC’s Medical Center at age 59 from complications of Idiopathic Pulmonary Fibrosis (IPF) while waiting for a lung transplant. That same summer, Dave was diagnosed with IPF, and told that the only cure was a lung transplant and the typical death rate from diagnosis of IPF to death was three years. Following rapid decline of his lung function, and finally resorting to 24/7 supplemental oxygen to survive, Dave miraculously outlasted the predicted death rate and just before it was way too late, he received “The Call” and drove the freeways like Mr. Toad’s Wild Ride to the hospital to check in and receive a double lung transplant four years to the day, (July 21, 2017) of his brother’s untimely death. During Dave’s brief report and re-return of his Adventurers Club Flag, Dave will share a brief story of his interrupted journey On the Great Adventure (O.T.G.A.) along with his sincere thanks to his brother Adventurers Club members who sustained him along the way.