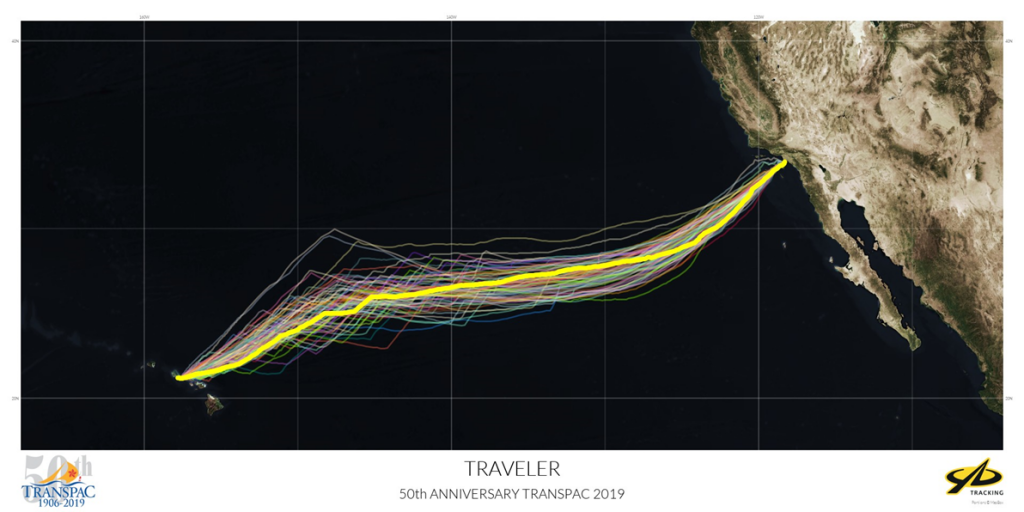 For this year’s race, there was a record number of boats: 90.  Sadly, eleven of those boats did not finish.  Ten boats had rudder problems or de-masted and retired from the race, and one boat, OEX (a Santa Cruz 70) sank.!  All crew members aboard OEX were safely rescued by another boat in the race (Pyewacket, owned by Roy Disney.) This year’s race had a lot of wind:  It blew at least 20 knots nearly the entire course, gusting to 30 in some of the squalls.  Also, there were very confused seas making steering quite difficult and exhausting, with Hurricane Barbara kicking up waves from the south, another huge storm off Alaska sending waves from the north, and the large rolling swells caused by the trade winds from the east. 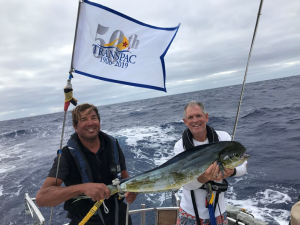 As the skipper and owner of Traveler, Michael was responsible for preparing the boat for the race, including the inventory of sails, provisioning (four meals a day for six people for 13 days), and safety gear, and of course responsible for the boat and all crew during the race. After the race, necessary repairs were made to the boat, provisions were purchased and stowed for Michael and the other two delivery crew (Dave Crowley and Roxy Salisbury), extra diesel fuel in 24 5-gallon jerry jugs were filled and tied down to the deck, and together they brought the boat back from Honolulu to Newport Beach, which took 17 days.  The total voyage, round trip, was about 5,000 nautical miles. On the way over, Michael kept two log books, one with the boat’s accurate GPS progress and the other using dead reckoning (course and speed through the water), as used by the Spanish galleons in the 16th and 17th centuries.  This was done to support Michael’s finding that the early Spanish explorers discovered Hawaii more than 150 years before Captain James Cook, but the Spanish mis-charted the location of the islands due to an unknown favorable 1 knot of current.  On the way back from Hawaii, Michael also participated in a study of mapping and logging the floating trash in the Pacific, sadly known as the Great Pacific Garbage Patch.