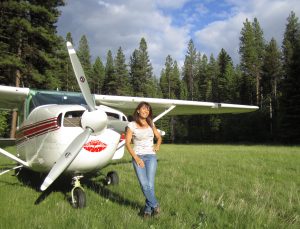 Ramona Cox’s passion for the outdoors, combined with a cultural curiosity, led her to travel to 50+ countries, with her favorite being the Blackwater region of Papua New Guinea.  At 21 years old, she made a goal to explore land, sea, air and everything in between.  Becoming an accomplished pilot and advanced nitrox scuba diver and underwater videographer enabled her to accomplish that goal. 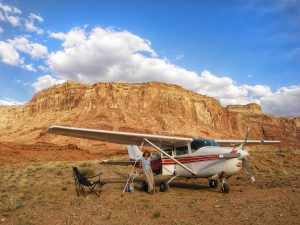 Ramona, aka SkyChick, is known for her four-month SOLO “air-camping” adventures landing her Cessna TU-206 into some of North America’s most remote and challenging wilderness airstrips where the pilot has ONE chance to get it right. Packing her plane with an inflatable kayak, motorized bike, tent, mobile office essentials, Honda generator and an arsenal of weapons, she has dodged moose, wolves, bear and mountain lion, dealt with major storms and fended off animals threatening her plane with her in it!  Landing solo in the middle of 1.4 million acres of wilderness with no roads, power, cellular or 911, she’s learned self-sufficiency the hard way. Fishing for food and hunting small game with a traditional recurve bow, she merged with nature and discovered a heightened awareness that she believes attributed to her safety throughout the journey. Her adventures are featured in her book and DVD, “Flying Off The Grid” along with seminars at major airshows and across the country fondly sub-titled “How to Survive Your Fun Weekend”.

In 2014, Honda Corporation approached Ramona to be a sponsored blogger, ambassador, and their voice for general aviation. The relationship continued and in 2019, they partnered on the “Skyway to Highway Journey” whereby she switched from the skyway, birds eye view from her aircraft, to the highway view, exploring the US in a travel trailer. Thirty-three states and 4 ½ years later, the journey continues.

Utilizing her aviation skills to give back, Ramona received the International “Fly It Forward Challenge” Award for giving 135 flights to females, aged 5 to 75, over a three-day period. Ramona’s believes that FEAR is the biggest obstacle to living life fully and if one can help another break through a fear barrier, they’ve changed their life forever.

World-class adventurer, born to Adventure presented by Romona Cox AKA SkyChick on Thursday, April 6, 2023
Reservations are required.
Reservations close at Midnight on Wednesday before the program.
If you are a member, please log in to purchase dinner at a discounted price.