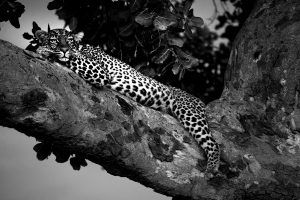 Gower Frost always had a deep fascination with Africa since his early childhood years. His father was a well-known make up artist in the movie industry and had made several movies in Africa. These movies included: “The African Queen”, “Odongo”, “The Roots of Heaven”, and “The Lion”. His stories and the letters he sent to Mr. Frost from the various locations that he had been on, captivated Frost’s imagination and the desire to one day visit these places . On “The Lion”, the senior Frost worked with the Maasai and told his about their culture and their traditions, and the son resolved that one day he would visit these magnificent people and witness their lifestyles for himself.

In his own career, Gower Frost had the privilege of traveling all over the world, but it was not until 2021 that he was able to finally realize his dream of visiting East Africa, specifically Tanzania, and having the opportunity of discovering for himself the stories that his dad had told him. Of course, much had changed over the years but the essence of Africa, this magical Continent still permeated every aspect of his trip. 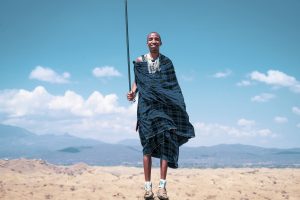 He had also read the 1959 book “Serengeti shall not Die” by Bernhard Grzimek and seen the award-winning documentary of the same name by Bernhard and his son Michael (both of which were fundamental in his desire to see the “Great Migration” in Northern Serengeti: a truly unforgettable experience).

Finally, apart from having an extraordinary guide (Baraka) with him on this trip (including all the visits to the safari parks) it was on the advice of his daughter that he made a special trip to the Lake Eyasi region to visit the Hadzabe tribe (one of the last hunter-gatherer tribes in Africa). This visit, together with another one to the Datoga tribe, was a memorable experience never to be forgotten.

Gower Frost is a film producer and son of the famous make-up artist, George Frost, Gower had always been around the movie business, and it was therefore only natural that it would become his choice of career. Starting as a production assistant on “Half a Sixpence” and then working as an assistant editor going through several years’ apprenticeship before starting his own company.

In 1970 with partner Adrian Lyne, he founded Jennie & Co Film Productions. The company enjoyed great success on both sides of the Atlantic, with offices in London, New York and Los Angeles and even winning numerous awards for its work including the Palme D’Or at the Cannes Festival in two successive years. The company made several notable short films which Gower produced: “The Table” and “Mr Smith” directed by Adrian Lyne and “Victims” directed by Alan Blake.

His feature credits include “Slayground” directed by Terry Bedford, “Finnegan Begin Again” directed by Joan Micklin Silver nominated for Best Film at the ACE Awards and “A Gathering of Old Men” directed by Volker Schlondorff which received the NAACP Award for best Dramatic Movie.

Vanishing Tanzanian Tribes with Gower Frost on Thursday, December 1, 2022
Reservations are required.
Reservations close at Midnight on Wednesday before the program.
If you are a member, please log in to purchase dinner at a discounted price.