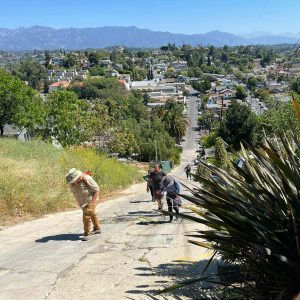 What’s all this about urban hiking? Where do you do it? Why do you do it? This is an illustrated conversation about Bob Inman’s passion for foot travel as the perfect avenue to find what is notable, historical, quizzical and beautiful in our great American cities. 7300 people have joined him over the past twelve years; see why they keep coming back for more.

Please join us for a conversation about how brisk, exercise-walking can be the perfect avenue to find what is notable, historical, quizzical and beautiful in our great American cities. True adventurers know the value of exploration in all sorts of environments. Mr. Inman will describe and illustrate the experience of how the more than 300 urban walks that he has led in twelve years have created enjoyment for 7300 individuals. He will also speak broadly about how urban discovery walking has become a local and a national passion. He will describe books on the subject including his own. 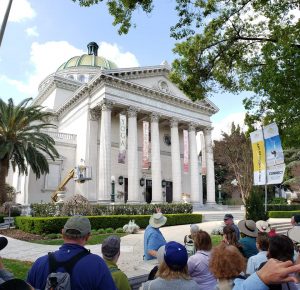 Inman will share anecdotes and illustrations of the elements that contribute to an engaging urban hike, both the type of terrain where he chooses to travel and the features that he sets out to cover along the way. Besides urban hiking in Southern California, he will illustrate and talk about experiences with urban hiking in Seattle, Denver, Pittsburgh, and Philadelphia. He will talk about the Inman 300, “America’s First Urban Thru-hike”. This is a 230-mile route that traverses 360 public stairways between La Cañada Flintridge and San Pedro and attracts hard core hikers from around the country.

An Angelino by birth, Bob Inman began hiking for exercise and enjoyment when he was a Boy Scout. He has hiked every year since then, backpacking and day hiking in the Sierra, the Desert Southwest, and in Europe. Bob came to the idea of urban hiking while living in Philadelphia during his thirties. Always living near the center of big cities, he loves the culture, the architecture, the neighborhoods, the history, the food, and the people. The idea of merging his passion for all-day walking with urban exploration has been a perfect fit and avocation for now forty years. Inman retired eight years ago from a 35-year career in transportation logistics, with a specialty of fresh fruit and vegetables. In the past dozen years, Inman self-published two books about public stairways and other pedestrian amenities in greater Los Angeles; he co-invented a 230-mile hiking route across the LA Basin named the Inman 300; he was selected by his former Occidental College professor, Robert Winter, to fully revise and republish the seminal guide to Los Angeles architecture. His most recent book is Urban Hikes Southern California, published in 2021 by Falcon Guides.

Urban Hiking with Robert Inman on Thursday, June 16, 2022
Reservations are required.
Reservations close at Midnight on Wednesday before the program.
If you are a member, please log in to purchase dinner at a discounted price.