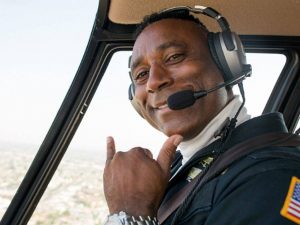 Robin is a helicopter pilot, entrepreneur, and Jamaican native. He started Celebrity Helicopters out of Zamperini Field in Torrance to fly for stunt men and Hollywood celebrities. Robin donates most of the profits from Celebrity Helicopters to Tomorrow’s Aeronautical Museum (TAM), one of the only interactive aviation museums in the United States that offers hands-on involvement with its static displays, virtual reality aircraft simulators, and youth programs.

TAM’s mission focuses on aeronautical education and exposing youth to careers in aviation. Robin has close ties to the Compton school district. Working with the district & aerospace volunteers Robin has built an after school program in which High School seniors can take courses that count for graduation credits in their senior year at TAM. The classes focus on exposing students to STEM, aerospace, and engineering skills. Students can also elect to pursue their rated Pilots license. Students can complete their senior year with a cross-country solo flight and earn a pilots license, jump starting their career in aviation.

Tomorrow’s Air Museum with Robin Petgrave on Thursday, July 30, 2020
Reservations are required.
Reservations close at Midnight on Wednesday before the program.
If you are a member, please log in to purchase dinner at a discounted price.