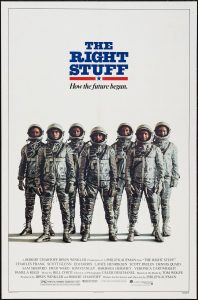 This adaptation of the non-fiction novel by Tom Wolfe chronicles the first 15 years of America’s space program. By focusing on the lives of the Mercury astronauts, including John Glenn (Ed Harris) and Alan Shepard (Scott Glenn), the film recounts the dangers and frustrations experienced by those involved with NASA’s earliest achievements. It also depicts their family lives and the personal crises they endured during an era of great political turmoil and technological innovation.

Cooper (played by Dennis Quaid) was launched into space on May 15, 1963, aboard the Faith 7 spacecraft, for what turned out to be the last of the Project Mercury missions. Because MA-9 would orbit over nearly every part of Earth from 33 degrees north to 33 degrees south a total of 28 ships, 171 aircraft, and 18,000 servicemen were assigned to support the mission. He orbited the Earth 22 times and logged more time in space than all five previous Mercury astronauts combined: 34 hours, 19 minutes, and 49 seconds. During the 19th orbit, the capsule had a power failure. Carbon dioxide levels began rising, both in Cooper’s suit and in the cabin, and the cabin temperature climbed to over 130 °F. The clock and then the gyroscopes failed, but the radio, which was connected directly to the battery, remained working, and allowed Cooper to communicate with the mission controllers. Like all Mercury flights, MA-9 was designed for fully automatic control, a controversial engineering decision which reduced the role of an astronaut to that of a passenger, and prompted Chuck Yeager to describe Mercury astronauts as “Spam in a can”. “This flight would put an end to all that nonsense,” Cooper later wrote. “My electronics were shot and a pilot had the stick.” Turning to his understanding of star patterns, Cooper took manual control of the tiny capsule and successfully estimated the correct pitch for re-entry into the atmosphere. Precision was needed in the calculation; small errors in timing or orientation could produce large errors in the landing point. Cooper drew lines on the capsule window to help him check his orientation before firing the re-entry rockets. “So I used my wrist watch for time,” he later recalled, “my eyeballs out the window for attitude. Then I fired my retrorockets at the right time and landed right by the carrier.”

The Right Stuff (1983) on Saturday, May 15, 2021
Reservations are required.
Reservations close at Midnight on Wednesday before the program.
If you are a member, please log in to purchase dinner at a discounted price.