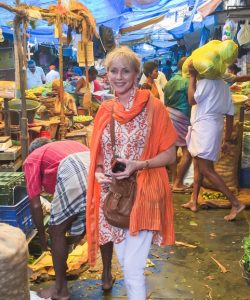 India’s palaces, forts, temples, and tombs are on every tourist itinerary and in every guidebook. But the country’s magnificent subterranean stepwells remain largely unknown both within and outside the country. These unique water-harvesting structures – marvels of architecture, engineering, and art – proliferated throughout the subcontinent for over a millennium and are thought to have numbered in the thousands. But despite their former importance, stepwells eventually faded into oblivion and most became neglected, abandoned, or obliterated by the 19th century. 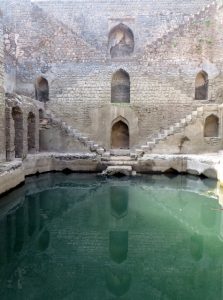 First constructed around the 6th century CE, stepwells were a direct response to India’s capricious climate which is dry for most of the year followed by intense monsoon rains. Accessing water year-round was a necessity, especially in dry western regions where the water-table could be ten stories below ground. Deep well shafts attached to stepped corridors made it possible to reach the precious resource regardless of the season, even when the water was at its lowest level. During monsoons, the steps would gradually submerge as water levels rose.

Although their primary purpose was to supply water year-round, stepwells also served as important civic centers, spiritual destinations, cool retreats in brutal heat, and indispensable oases for caravans along remote trade routes. No two are alike and they vary in design, scale, and ornamentation with some boasting magnificent carving and sculptures. But with the advent of village pumps and modern plumbing, stepwells became untethered from their original purpose and communities were no longer invested in their upkeep. Although some are still in use for irrigation or as shrines, most are disintegrating or have disappeared completely.

Journalist Victoria Lautman saw a stepwell during her first visit to India in the early 1980’s. Returning to India many times subsequently, she eventually became obsessed with the little-known structures and began spending several months each year traversing the subcontinent in search of them whether in large cities, tiny villages, or remote outposts not located on any map. To date she’s documented some two-hundred, many of which appear in her landmark book, The Vanishing Stepwells of India, first published in 2017 and recently released in paperback (Merrell Publishers, London). Her photographs of the stepwells have been the subject of several exhibitions, most recently at UCLA’s Fowler Museum, and Victoria is a frequent lecturer on this unusual topic, tracing the fascinating history and current state of India’s least-known treasures.

Victoria Lautman is a Los Angeles-based journalist who holds a B.A. in anthropology and an M.A. in art history. As a newly-minted art historian she worked for the Smithsonian Institution’s Hirshhorn Museum before embarking on a career as a journalist in Chicago. During three decades in the city she hosted and produced several long-running radio programs dedicated to the arts, literature, architecture, and design. In addition, she contributed to dozens of newspapers and magazines including The Wall Street Journal, Architectural Digest, Architectural Record, Metropolitan Home, the Chicago Tribune, Elle Décor, and many others. Since relocating to Los Angeles in 2018, Victoria has focused on a variety of new projects and lectures, including The Creative Multiverse of Millard Sheets.

Subterranean Ghosts: India’s Vanishing Stepwells with Victoria Lautman on Thursday, June 23, 2022
Reservations are required.
Reservations close at Midnight on Wednesday before the program.
If you are a member, please log in to purchase dinner at a discounted price.