This program was organized by Alec Schumate. 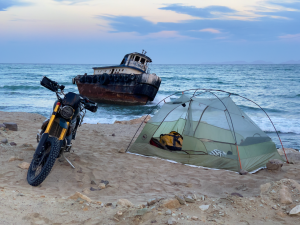 Scott McQueen had dreams of traveling the world unsupported and solo on a motorcycle, inspired by motorcycle overlanders like Elspeth Beard, Ted Simon, and Sam Manicom. However the realities of having a stable career, an unexpected divorce, and a global pandemic kept him slouched at his desk in his adopted home of Pasadena, California. Day in, day out, Scott worked in the IT department for a private school and scoured the internet for a taste of the adventure he longed for.
On a wild hair, Scott purchased his first off-road capable motorcycle; a Triumph Scrambler 1200 and started teaching himself how to transition pounding pavement to overcoming the obstacles and logistics of California’s Mojave Desert. With careful negotiation, Scott brokered a leave of absence from work and started on his first foray into solo motorcycle travel: Riding the length of Mexico’s Baja California unaided, unplanned, and completely off-pavement. 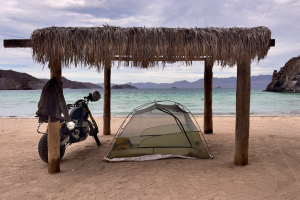 Scott will share the story of his first journey, the logistics involved, tips and tricks learned first hand and through the vast community he built around the trip, and what he hopes to carry forward into the next adventure.
Scott McQueen is an avid motorcyclist, SCUBA diver, IT nerd splitting his time between Pasadena, CA and Chattanooga, TN. 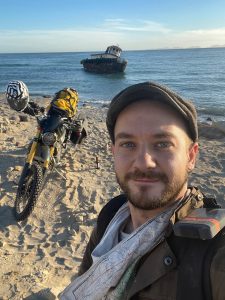 Solo Motorcycle Overlanding on the Baja Peninsula with Scott McQueen on Thursday, August 4, 2022
Reservations are required.
Reservations close at Midnight on Wednesday before the program.
If you are a member, please log in to purchase dinner at a discounted price.