This program was organized by Kendall Hudson, member #1206. 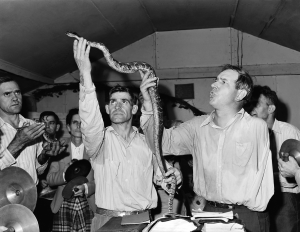 Deep in the hollers of eastern Kentucky, West Virginia and Tennessee, small congregations of rural churches prove their faith by speaking in tongues, handling venomous snakes and drinking poison. 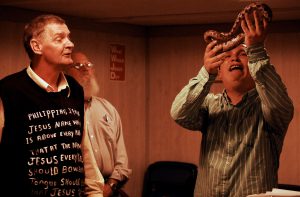 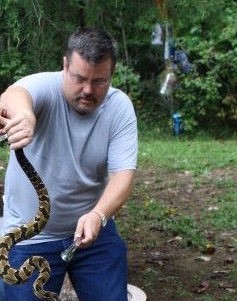 Snake Handling is a religious practice observed in a number of isolated churches throughout the Appalachian region. The practice began in the early 20th century and participants are often referred to as “Pentacostals” or “Charismatics” – but neither of these is the preferred name… which you will find out when you watch this program.

In the summer of 2008, Eric Streit spent three months living among serpent handlers in eastern Kentucky as part of a television series, Snake Man of Appalachia. But this was not Streit’s first exposure to the practice. Eric grew up in Kentucky, and his mother’s family all hail from Appalachia. His grandfather, along with some uncles and aunts, were part of the holiness movement, and Eric became familiar with serpent handling at a very young age. 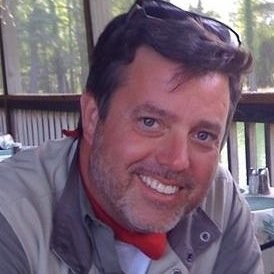 Eric is a two-term president of the Adventurers Club, a member of the Friars Club & the Kentucky Colonels Association. He lives in Mazatlan, Mexico with his wife and their eight-year-old son, Sidney Lazarus while producing television programs world-wide.

Serpent Handlers of Appalachia with Eric Streit on Thursday, February 18, 2021
Reservations are required.
Reservations close at Midnight on Wednesday before the program.
If you are a member, please log in to purchase dinner at a discounted price.