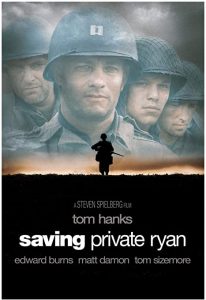 Captain John Miller takes his men behind enemy lines to find Private James Ryan, whose three brothers have been killed in combat. Surrounded by the brutal realties of war, while searching for Ryan, each man embarks upon a personal journey and discovers their own strength to triumph over an uncertain future with honor, decency and coura

On June 6, 1944, Ehlers was a Staff Sergeant and squad leader in the 18th Infantry Regiment, 1st Infantry Division. When the first wave became pinned down on the beach, his unit was transferred to a Higgins boat and sent forward early to assist. They fought their way off the beach and by June 9 were near the town of Goville, 8 miles inland. On that day, he led his unit’s attack against German forces and single-handedly defeated several enemy machine gun nests. The next day the platoon came under heavy fire. Ehlers was wounded, but managed to cover the platoon’s withdrawal; this included carrying a wounded automatic rifleman to safety and running back through enemy fire to retrieve his Browning Automatic Rifle. After treatment of his wounds, Ehlers refused to be evacuated and continued to lead his squad. For his actions he was awarded the Medal of Honor.

Saving Private Ryan (1998) on Saturday, June 5, 2021
Reservations are required.
Reservations close at Midnight on Wednesday before the program.
If you are a member, please log in to purchase dinner at a discounted price.