Are there local caves secretly dug by a Nazi spy ring? Is there a shipwreck that helped create a city? Was a mysterious unknown submarine accidentally dredged from the depths in New Orleans? Did an entire civilization completely vanish in New Mexico? What are those concrete things miles from anywhere? Did an aircraft land in San Francisco, with its entire crew missing? Explore these and other mysteries with David Finnern, Member #1065. 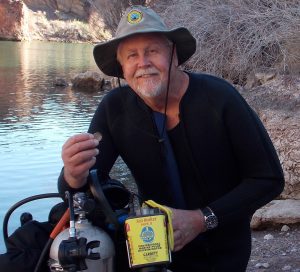 Author, explorer and investigator David Finnern has spent over 35 years searching for shipwrecks and submerged ruins. He has published hundreds of stories on underwater exploration, and has written on-assignment for such magazines as Skin Diver, Western and Eastern Treasures, Wreck Diver, Underwater USA, Western Diver and Immersed. He has also investigated land sites, such as lost aircraft and ghost ports, and written stories on other topics which have appeared in such publications as Nevada Magazine, The Orange County Register, and Adventure West.  Finnern is the author of several books, including the critically-acclaimed Passage Through Deep Waters, The Sport Diver’s Guide to Sunken Treasure, which received “Book of the Year” honors, and Lost Below, which chronicles some of the most intriguing shipwrecks, sunken aircraft, submerged ruins and undersea treasures in the Southwest. His recent novel, Beneath Black Water Cove, was awarded “top ten” honors in The Adventure Writers Competition. He has been a featured speaker at numerous functions throughout the United States and has appeared as a guest on various television networks, such as Fox, CBN and the National Geographic Channel. He is a member and former president of both The Adventurers’ Club and California Wreck Divers, Inc., and was elected a Fellow of The Royal Geographical Society in 2002.

Lost Tales and Mysteries with Dave Finnern on Thursday, September 10, 2020
Reservations are required.
Reservations close at Midnight on Wednesday before the program.
If you are a member, please log in to purchase dinner at a discounted price.