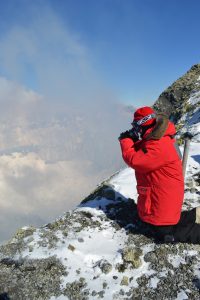 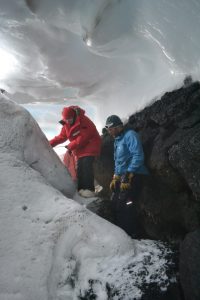 In 2016, Rosaly Lopes and artist Michael Carroll teamed up as fellows of the National Science Foundation to travel to Mount Erebus, Earth’s southernmost active volcano. The complex operations of Antarctica’s McMurdo station and outposts echo the types of strategies that future explorers will undertake as they set up settlements on the Moon and Mars.

Rosaly Lopes will tell the story of their journey, discussing Antarctica’s infrastructure, the training necessary for working in the hostile conditions, and their work at the volcano. They explored the caves and ice towers on the flanks of Erebus, taking photographs and eventually generating original art depicting scenes in Antarctica that are analogs to those on other planets and moons. The talk will discuss their journey from the initial proposal to the publication of a book. 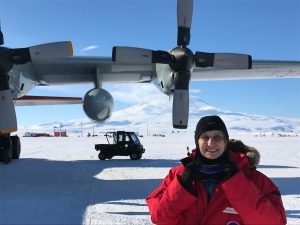 Dr. Rosaly Lopes is the Directorate Scientist for Planetary Science at the Jet Propulsion Laboratory. Her research expertise is planetary volcanology and she has studied volcanoes on Mars, Jupiter’s moon Io, and Saturn’s moons Titan and Enceladus. She was a science team member of both the Galileo and Cassini missions and is currently studying whether Titan may be habitable. She has authored or co-authored 9 books, including “Antarctica: Earth’s Own Ice World”. She has won numerous awards including the Carl Sagan medal from the American Astronomical Society and the Lowell Thomas medal from the Explorers Club.

Journey to Mt. Erebus in Antarctica with Rosaly Lopes on Thursday, January 26, 2023
Reservations are required.
Reservations close at Midnight on Wednesday before the program.
If you are a member, please log in to purchase dinner at a discounted price.