Margarita Reyes is the sister of Elias Reyes Jr. Elias who served with Second Battalion, Seventh Marines (2004-2008). In April 2014, Elias lost his life to suicide. Since then, Margarita has devoted her life to ending the veteran suicide epidemic. When she lost her brother, 2/7 veterans supported her family through the devastating loss.

The suicides from her brother’s battalion continued to rise and she wanted to do more. Recently, she banded together with Gold Star Father “Top” Washington and Navy Corpsman Richard Hayden who served with Elias to create a monthly support group for 2/7 veterans formed in the wake of the recent suicide of beloved Corpsman Michael McCarthy. In addition to ceaseless work for her 2/7 family, Margarita regularly speaks out and advocates for America’s veterans in media interviews, written form, and on film and television to end the tragic 22 a day veteran suicide statistic. 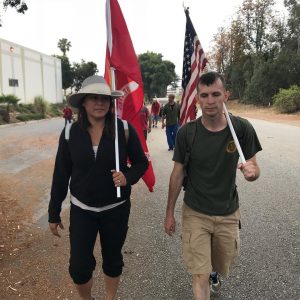 During her journey, she has produced a short film called “Un-Visible” directed by her acting coach and mentor Anthony Gilardi from the Anthony Gilardi Acting Studio.  “Un-Visible” is the story about the US 2nd Battalion, 7th Marines Veteran Steven Rodgers who took his own life after serving his country and the consequences on the family that he leaves behind. The part of Steven Rodgers is being played by Army Green Beret Veteran, Former NFL player, and activist Nate Boyer. The cast of the film is comprised of actual military/combat veterans and by the family members of veterans who have taken their own lives thus showing a genuine perspective that has never been seen before. The film is available for screenings upon request.

She also wrote an animated pilot script called ‘MIA: Maria in America’ about a disabled Marine veteran Maria who lost her leg in the war. Her latest, a feature script, is being produced this year and follows a group of veterans helping their community.

In 2020, she was a part of the feature film ‘MVP’ directed by Green Beret Nate Boyer. Nate included Margarita’s brother’s story in the film.

Every military veteran character in the movie is played by an actual veteran, and almost half of the film crew served. 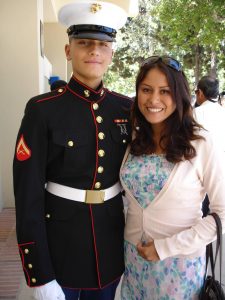 Margarita’s entertainment industry journey began in 1997. She started learning about film as an extra. Her first camera work was in music videos and continued in commercials and finally television and film. She has produced and written her own projects as well as acted in primetime television shows and movies. She has amassed over 80 television and film credits. She has several completed scripts, the latest which will be produced as a feature length film this year.

She trains at the Anthony Gilardi Acting Studio March 2018-present. She lives in Tarzana, CA with her husband and furry family members. Her daughter recently graduated with Honors from Cal Lutheran University.

Grassroots Veteran Suicide Prevention in the US and Mexico with Margarita Reyes on Thursday, February 10, 2022
Reservations are required.
Reservations close at Midnight on Wednesday before the program.
If you are a member, please log in to purchase dinner at a discounted price.