This program was organized by Vince Weatherby, Member #1060.

Because this was a movie screening, the program was not recorded or streamed. 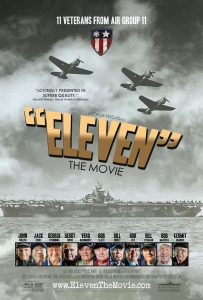 After discovering his late grandfather’s WWII Navy journal, film director George Retelas set out
to capture the stories of the remaining airmen that served with his namesake. “Eleven” is a
documentary feature comprised of interviews by eleven WWII veterans from Carrier Air Group
11 recalling their Naval Aviation tours off Guadalcanal Island and aboard the USS Hornet.
Featuring rare U.S. Navy footage and wartime photos, this national treasure is told entirely by
the surviving airmen— in their own words. Discover the personal stories behind the war in the
Pacific as eleven first-hand accounts tell the definitive story of Carrier Air Group “Eleven.” 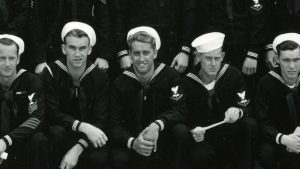 Carrier Air Group 11 was commissioned on Oct 10, 1942 as (CVG-11). They recorded a large number of
“firsts,” establishing its place as one of the US Navy’s top fighting air groups. In June 1943, pilots and
aircrews from CVG-11 conducted the first daylight raids off Guadalcanal Island during the fighting in the
Solomon Islands and New Georgia operations during World War II. During its second combat tour
(1944-45) they participated in operations over Leyte Gulf, French Indochina, Formosa Island (Taiwan),
and China while flying off the deck of the USS Hornet. For these operations, CVG-11 was awarded the
Presidential Unit Citation. The legacy of CVG-11 carries on today as Carrier Air Wing 11 (CVW-11)
headquartered at Naval Air Station Lemoore and attached to the aircraft carrier USS Nimitz. The exhibit
honoring Carrier Air Group Eleven is on board the USS Hornet, a floating museum in Alameda, CA. 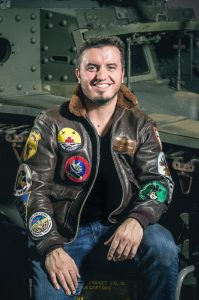 George Retelas is a visual artist based in the San Francisco Bay Area. He produced the award-winning
short film “Franklin” about a forgotten veteran photographed by a mysterious traveler, followed by the
short film drama “The Girl and the Graduate” that premiered at the le Festival des Films du Monde. He
completed his masters in journalism school at San Jose State University, where upon graduation he
found his grandfather’s WWII Navy journal. “Eleven” is his first feature film. www.GeorgeRetelas.com

George Retelas- Eleven: The Story of 11 Men From Air Group 11 on Thursday, January 16, 2020
Reservations are required.
Reservations close at Midnight on Wednesday before the program.
If you are a member, please log in to purchase dinner at a discounted price.