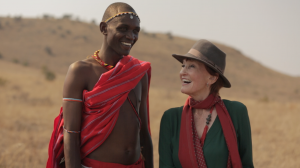 Kathy’s life has been, and continues to be, one of reinvention and transformation. Leaving behind her conservative Iowa roots, Kathy graduated from Wellesley College, married an Englishman, and moved to London. Ten years and many adventures later, with her husband and two children, she flew to Kenya where she entered a tumultuous and exciting world as a journalist and writer in an emerging new nation. In 1988, she returned to London to begin a new career as the head of Creative Visions Productions to make social impact entertainment. The tragic death in 1993 of Kathy’s son Dan, a 22-year-old Reuters’ photojournalist, stoned to death in Somalia, was to change her life again. 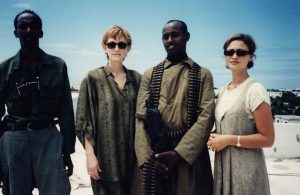 Aware that her very survival depended upon transforming the horror of Dan’s death into a force for good she and her then 22-year old daughter went to Mogadishu and (among many things) produced an Emmy-nominated documentary (Dying to tell the Story) about journalists at risk.

Kathy has authored 17 books, including “In the Heart of Life”, a memoir about her colorful life, is a popular speaker, and continues to write books, while playing an active role in Creative Visions, located in the Dan Eldon Center for Creative Activism in Malibu. Kathy lives next door with her husband, renowned hospitality designer Michael Bedner.

Dying to Tell the Story with Kathy and Dan Eldon on Thursday, February 17, 2022
Reservations are required.
Reservations close at Midnight on Wednesday before the program.
If you are a member, please log in to purchase dinner at a discounted price.