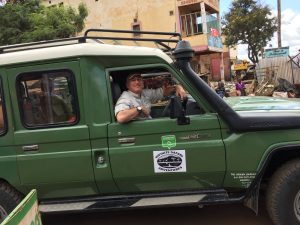 For two decades, Alan Feldstein worked as a successful entertainment and marketing/advertising attorney in Los Angeles, negotiating the original deal for the “Spinning” Bike and representing children’s cartoon shows, pop music stars, actors and commercial productions, including many infomercials on late night television.

Alan work took him into the dietary supplement industry and in 1998 became general counsel of a supplement company. The day he started was the same day the FDA started an attempt to ban its biggest selling product. For 7 years Alan ran an industry trade association, was a lobbyist and the point person for the supplement’s battle with FDA. As a result of that he traveled a lot. And in 2000, with 400,000 frequent flyer miles to his credit asked his wife where in the world she wanted to go. She said on a safari in Africa. They did just that. And as his wife says, the giraffes had him at “jambo.” (Swahili for hello). Africa was never out of his mind or heart and in 2005, for his 50th birthday, Alan returned to Africa to successfully climb Mt. Kilimanjaro. After summitting he and his wife went up into the Mahale mountains to track chimpanzees. Steve, the manager of the lodge there and he became friends as they shared a passion for kayaking.

They remained in touch and Alan assisted with design input so that Steve could build 2 kayaks as kayaking did not exist in Tanzania. Alan decided in 2008 to share his love of Africa with his children. Steve arranged his safari and brought the 2 boats. It was during that safari Alan became one of the first to ever kayak off the coast of Tanzania. It was there and then that he decided to leave the practice of law and share his passion for Africa and adventure to create Infinite Safari Adventures. From humble beginnings in 2009 Infinite Safari Adventures now creates custom experiences for its clients in 12 different countries throughout East and Southern Africa.

Alan will describe his first experiences in Africa, some of his adventures (and mis-adventures) and why he is so passionate about Africa. He will discuss his involvement in Africa in the form of assistance to communities and wildlife conservation and why he believes everyone should experience a safari in Africa.

From Lawyer to African Safari Operator with Alan Feldstein on Thursday, August 6, 2020
Reservations are required.
Reservations close at Midnight on Wednesday before the program.
If you are a member, please log in to purchase dinner at a discounted price.