This program was organized by Greg Downing .
Make a Reservation 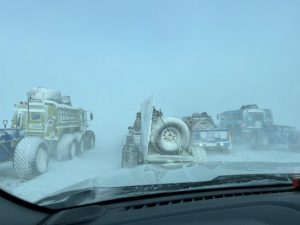 In March 2022, a team of the world’s experts on Polar wheeled travel converged in Yellowknife, Canada and began a month-long overland and over-ice expedition with seven vehicles to be the first to reach the High Arctic from the continental land mass. The expedition was to confirm that the last piece of a planned circumnavigation of the Earth through both Poles on wheels will be possible in 2024. The team included Comrie-Picard (a Canadian living in California), Icelandics, Russians, Ukrainians, Americans, a German scientist, and a Scottish doctor, and they were on the expedition as the conflict in the Ukraine erupted. Members of the team had already completed 370,000km in Antarctica, an amphibious crossing of the North Pole, and the length of Greenland on wheels. Details at www.transglobalcar.com 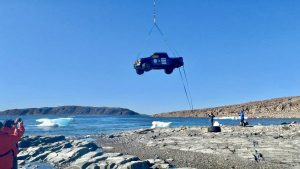 The team completed the 2,200km journey to Resolute, Nunavut in three weeks with six of the vehicles, having to leave one (an electric hybrid) at an Inuit village thanks to a technical issue. They endured severe weather and camped at -36F in 20mph winds. On the return route, one of the vehicles fell through the ice in an area with high currents on the Northwest Passage, only a few kilometers from where the Franklin ships were abandoned.
In August 2022, Comrie-Picard and a specialist team returned to the spot to complete an underwater and air-lift of the lost vehicle in order to rehabilitate the area. It is one of the most elaborate machine extractions ever completed in the High Arctic. 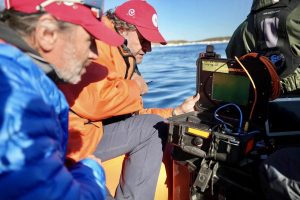 Andrew Comrie-Picard is a five-time X Games athlete and medalist, a Hollywood stuntman who has appeared in Deadpool and Fast and Furious movies, and a lead member of the first overland expedition from the continental shelf of North America to the High Arctic. He is an overall North American Rally Champion, Pikes Peak record-holder, and Baja1000 class winner. Andrew also has hosted car television shows on Discovery, designed stunt shows on Netflix, and co-wrote and produced Top Gear on History Channel. He studied in Canada and England, including a degree in Philosophy of Science at the University of Toronto, graduate law and MBA degrees at McGill University, and a Master’s degree in Political Economy at Oxford University. He was a competitive rower at McGill and Oxford, captain of the Oxford University Wine Society, and a member of the notorious Oxford Stunt Factory. He lives in Los Angeles with his wife and two daughters, who like to frighten him with their stunts.

First Successful Wheeled Overland Expedition to the High Arctic narrated by Andrew Comrie-Picard on Thursday, February 16, 2023
Reservations are required.
Reservations close at Midnight on Wednesday before the program.
If you are a member, please log in to purchase dinner at a discounted price.