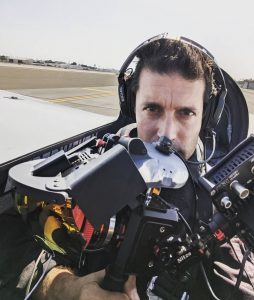 Nick Bićanić is coming to discuss fighter jets and augmented reality and what he has done with both of them! He is a helicopter pilot and a ski and windsurfing instructor. Nick is also an inventor and entrepreneur and holds multiple patents in the fields of Virtual Reality and Augmented Reality.

He created multiple notable products in the AR/VR space, and became a Founder and Founding CTO of RED 6 AEROSPACE, a company building tools to train the fighter pilots of the future, tools that are fast becoming the cornerstone of the military metaverse.

Fighter Jets and Augmented Reality with Nick Bićanić on Thursday, April 7, 2022
Reservations are required.
Reservations close at Midnight on Wednesday before the program.
If you are a member, please log in to purchase dinner at a discounted price.