This program was organized by Craig Caryl. 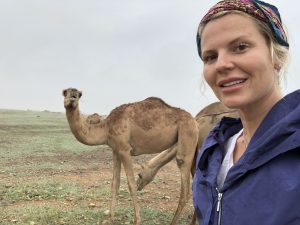 Ashley Borders discovered this magical land working in Dubai’s film industry.  She was hired to help film a series of spots in remote Oman and the capital Muscat which began a 15 year love-affair with a place, mostly untouched by the outside world.  From Salalah, the southernmost point bordering Yemen; home of frankincense, Queen of Sheba and Job’s grave, to the Hajar mountain range in the north, and the marine rich environment of the Indian Ocean, Ashley will share a few of her adventures in this ancient land. 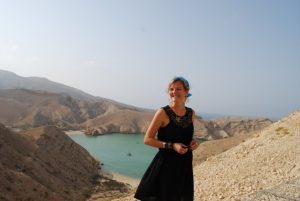 At aged 9 Ashley began traveling with her father to the remote Australian Outback to treat the local Aboriginals. He was a surgeon working as a part of Royal Flying Doctors NGO.  This instilled a wanderlust that she wholeheartedly embraced. Since that moment, her life has been a constant adventure off the beaten path. From negotiating Haiti in the middle of a riot to bribing her way out of Senegal and hiking out of a remote jungle in Panama to riding elephants through tiger laden estuaries in Nepal. Ashley sees the world through a very unique and colorful lens. She has spent the last two decades working in and around Europe and the Middle East in high-fashion and film working for International advertising campaigns like Mercedes, Gulfstream, GMC and many more.

Ashley continues to push her boundaries by taking on new challenges. Currently she is in graduate studies at Harvard in archaeology and anthropology. With this Ashley hopes to gain even more understanding of the incredible mysteries to be found throughout our planet. And if you want some of that true Southern Charm Savannah watch her reality show action season 1 on Bravo and sit back with a bag of popcorn and enjoy as Ashley teaches the her aristocrat southern friends how a travel hacking pro does it by working part time for Delta to get full time travel benefits. Don’t mess with Ashley Borders!

Exploring Oman: A Remote and Untrod Land Full of Beauty and History with Ashley Borders on Thursday, January 19, 2023
Reservations are required.
Reservations close at Midnight on Wednesday before the program.
If you are a member, please log in to purchase dinner at a discounted price.