Jim Dorsey is an explorer and award winning author who has spent two decades visiting some of the most remote tribal cultures on earth. His driving goal has always been to make the world aware of these peoples before they vanish. 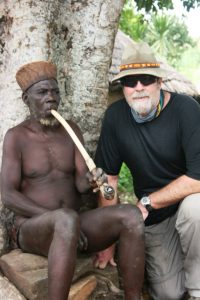 During his extensive career as an Adventurer and Explorer, Jim has undertaken numerous expeditions around the world. From trekking across the Sahara, to exploring remote volcanoes in Ethiopia with NASA, Jim has quite a few stories to tell from his travels off the beaten path.

His latest book, Baboons for Lunch, is available on Amazon and his previous book, Vanishing Tales from Ancient Trails, is available exclusively from Lulu.com. His stories have appeared in 20 travel anthologies. He has won 22 Solas Award categories from Travelers Tales and is a contributor to their “Best Travel Writing, Volumes 10, and 11″ and the Lonley Planet Literary Anthology.”

He is a retired fellow of the Explorers Club and member emeritus of the Adventurers Club of Los Angeles.

Expeditions and Advocacy with Jim Dorsey on Thursday, June 4, 2020
Reservations are required.
Reservations close at Midnight on Wednesday before the program.
If you are a member, please log in to purchase dinner at a discounted price.