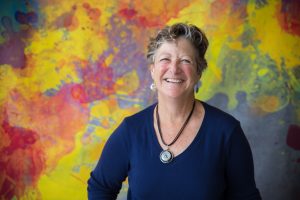 Not all activists march in rallies or carry picket signs. In Merryl Goldberg’s case, she carried a soprano saxophone and a music notebook. Merryl Goldberg will share her story of evading the KGB by bringing information into and out of the Soviet Union to help people defect by utilizing her own homegrown encryption code that turned text into musical notes on sheet music. This inspiring journey of resilience, transformation, and humanity stems from 1985 when the Cold War tension was heightened.  The talk will likely resonate with music lovers, history buffs, mathematicians, crypto enthusiasts, and anyone who has ever dreamed of going undercover. She will describe the remarkable and courageous people she met, along with the trials and tribulations of being followed, interrogated, and ultimately deported from the Soviet Union.

Merryl Goldberg is a Professor of Music at California State University San Marcos and Director of the ART=OPPORTUNITY campaign of Center ARTES, a university center dedicated to restoring arts to education.  Her publications include Arts Integration: Teaching Subject Matter Through the Arts in Multicultural Settings 6th edition (2021) as well as other books, articles, chapters, editorials, and blogs.  She has received numerous research and programmatic grants including Federal Department of Education Arts in Education Program, Fulbright-Hays Foundation, National Endowment for the Arts, California Arts Council, Stuart and Panta Rhea grants.  In 2018 she was awarded the Wang Family Excellence Award for Outstanding Faculty Teaching in the CSU (23 campus) systemwide.  Merryl’s undergraduate degree is from New England Conservatory of Music, and her Masters and Doctorate are from the Harvard Graduate School of Education.  Prior to entering academia and as a professional musician, she recorded numerous CDs and was on the road for 13 years playing the saxophone with the Klezmer Conservatory Band.  Merryl’s hometown is Boston. Go Red Sox!

Evading the KGB with Sheet Music with Merryl Goldberg on Thursday, August 25, 2022
Reservations are required.
Reservations close at Midnight on Wednesday before the program.
If you are a member, please log in to purchase dinner at a discounted price.