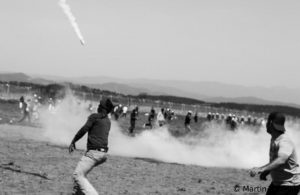 Hellscape to most and homeland to few, Idomeni is the infamous abandoned rail station that became Europe’s largest refugee camp. Construction of a barbed wire fence created a “hard border” at the northern Greek border with North Macedonia. This same land was once called “the gateway to Europe.” But at the height of the refugee crisis in 2016, it became a bottleneck for over 20,000 people fleeing other countries. 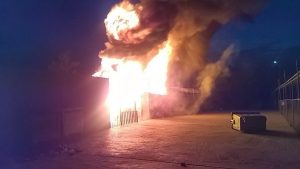 Bloody riots, human trafficking rings, disease outbreaks, and a black market passport trade all play out on this muddy wasteland. Amidst decaying train cars and rusty tracks, the tiny village harbored desperate travelers who could go no further.

Among these people were refugees who once served as combat interpreters for the U.S. and U.K. armed forces. These Iraqis and Afghanis became targets when our troops pulled out after faithfully serving alongside our soldiers as wartime allies. They survived and fled, following dangerous human trafficking routes through Turkey, across the Mediterranean sea, and over mainland Greece.

Dr. Gillenwater will tell the story of how she, the least expected person, was able to help these heroes amidst the chaos of the 2016 refugee crisis.

Dr. Courtney Gillenwater is an American physician who volunteered along human trafficking routes in Greece. She served on the island of Lesvos and the northern border zones of the mainland primarially supporting local Greek humanitarian efforts and small volunteer organizations. Unconstrained by the red tape that limited most large NGOs, she was resourceful in her navigation of a broad range of key players in the complex international humanitarian relief effort at the border.

Dr. Gillenwater provided medical services to government officials, local villagers, aid workers, independent volunteers, and humanitarian anarchists as well as anyone who found themselves on underground smuggler routes or affected by the refugee crisis.

By making herself useful to parties on both sides of the fence, her team was able to access and treat some of the most vulnerable refugee populations in the region. She was able to find lost U.S. wartime allies, who soon discovered that their faithful service was not forgotten.

Courtney Gillenwater- Both Sides of the Fence on Thursday, February 6, 2020
Reservations are required.
Reservations close at Midnight on Wednesday before the program.
If you are a member, please log in to purchase dinner at a discounted price.