This program was organized by Alan Feldstein #1094. 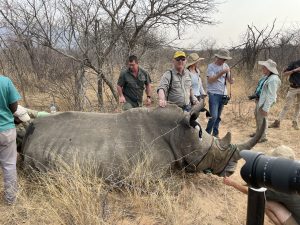 In September 2021, ACLA Member Alan Feldstein (owner of Infinite Safari Adventures) organized a unique Safari for veterinarian and expert wildlife photographer Dr. Carl Palazzolo (Dr. P) to give him and other veterinarians a unique inside look at conservation and how to manage wildlife. Their experience had them herding impalas, sedating and moving a cape buffalo, darting and collaring rhino, and sedating and removing the collar of a cheetah. Tonight’s program (jointly presented by Alan and Dr. P) will give an inside look at their experiences and discuss the issues that face endangered wildlife in South Africa. 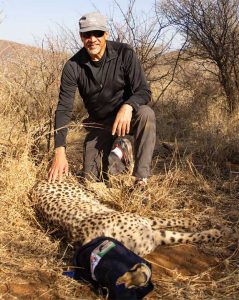 Dr. P has also been traveling the world and teaching wildlife photography since his first trip to Russia in 1984. His photography is not just about the photo, it is to share with the world what is happening in many unique places that most people cannot visit and that are having substantial problems with climate change. He does this sharing through his web site and his many public presentations, using his photos to tell a story. He commonly brings veterinary students with him to learn about the world and to carry on educating the public of the plight of the animals and people on our planet. Alan Feldstein – Member 1049 has been a member of ACLA for over 20 years. Alan is a “recovering lawyer” who made his first trip to Africa in 2000. The giraffes had him at “Jambo”. In 2005 he summited Mt. Kilimanjaro and then tracked chimps in the Mahale Mountains. It was there he met his future East African Ground Partner who shared a love of kayaking. In 2008 he took his children to Africa and on that trip became one of the first people to kayak off the coast of Tanzania. It was there and then that he decided  to leave the practice of law and share his passion for Africa and adventure to create Infinite Safari Adventures. Alan is a board member of the Adventurer’s Club of Los Angeles and a member of the Explorers Club. He also sits on the board of directors of the Cheetah Conservation Fund, Over & Above Africa, The Bird School Project, and TourSafe Africa.

Conservation Working Safari in South Africa on Thursday, March 3, 2022
Reservations are required.
Reservations close at Midnight on Wednesday before the program.
If you are a member, please log in to purchase dinner at a discounted price.