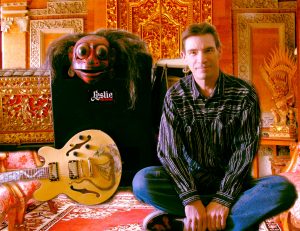 Chuck Jonkey, Member #1026, is an adventurer, composer, musician, and filmmaker who transforms his wild experiences into sound, music and film. Chuck’s exotic adventures have taken him to the furthest reaches of primitive worlds. Referred to as an “ethnomusicianthropologist” Chuck travels around the world in search of adventure among the world’s most isolated tribal groups. He has explored the deep Amazon and the rain forests of Thailand, Costa Rica, Guatemala, Brazil, Colombia, Indonesia, and Mexico. Chuck’s travels have also taken him to West Africa, Borneo, French Polynesia, Morocco, Venezuela, Russia, China, India and many other countries. 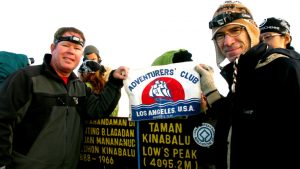 Chuck performed with the Manhattan Transfer on their CD “The Offbeat of Avenues” (they recorded one of his songs – “The Quietude”). The same song was re-recorded with a full orchestra on the Manhattan Transfer’s new Cd “The Symphony Sessions”. He was invited by RAVI SHANKAR to play with him at the National Cathedral in Washington, D.C.

Chuck Jonkey’s music has been featured in the following feature films & TV shows: “Rambo 4”, “In The Mix”, “Survivors”, “Proof of Life”, “Flubber”, “J.F.K.”, “The Doors”, “The Mighty Joe Young”, “Heaven on Earth”, “Travel Channel”, “The Film That Never Was” and many more. He has worked with Danny Elfman, James Horner, Ron Jones, Steven James Taylor and other film composers.

“Travel Channel” aired a segment on Chuck as part of their “Amazing Vacation Videos” series. “Animal Planet” also has featured Chuck’s exotic animal footage. Chuck composed several hundred musical pieces for MICROSOFT’s software products.
He spent months journeying through Java, Bali, and the Gili Islands recording, filming and documenting native music and dance. Chuck’s most recent expeditions have been to India, Thailand, Ukraine, Morocco and islands of the Carribean. He recently climbed Mount Kinabalu (on the island of Borneo).

Chuck owns Sonic Safari Music. He has produced and published over 110 CDs of exotic music. Chuck has also produced several TV shows and documentaries. He is the host of Exotic Worlds TV show that has aired around the world. He hosted the Sonic Safari radio show on KCSN. Chuck has given many audio/visual presentations to universities, schools, churches, the Adventurers’ club and other civic groups. He is a member of the Los Angeles Adventurers’ Club.

Recently Chuck spent over 2 years working with Disney Imagineering composing music for the new Disneyland in Shanghai, China. He composed all of the background music for “Adventure Isle” – over 4 hours of music with 46 distinct songs.

You can find Chuck’s latest work at www.SonicSafariMusic.com

Chuck Jonkey’s Exotic Worlds and Sonic Safaris on Thursday, May 7, 2020
Reservations are required.
Reservations close at Midnight on Wednesday before the program.
If you are a member, please log in to purchase dinner at a discounted price.