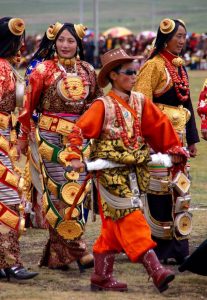 East of the official Tibetan Autonomous Region, Kham and Amdo are remote, isolated and culturally Tibetan provinces in China. Their landscapes consist of snowy peaks and rolling grasslands on the Tibetan Plateau, where nomadic peoples have maintained grazing cultures with sheep and yaks for centuries. Just as at American county fairs and rodeos, Tibetans love to come together for colorful annual festivals and wild competitions of horsemanship. Tibetan Buddhist culture, which exists in large regional monasteries as well as in smaller local ones throughout the grasslands, and which is often mixed with the local animistic and shamanic practices of the pre-Buddhist Bon religion, also presents opportunities for seasonal celebrations. 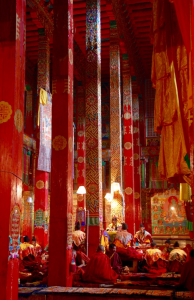 In 2006, Cheri Hunter traversed the grasslands in a group with 4-wheel drive vehicles, photographing these festivals and rituals, several of which are no longer being held.  A significant aspect of Tibetan culture is their use of textiles and rugs throughout the area, some local and some manufactured and imported from afar exclusively for the Tibetan market.  This includes articles of traditional costume “fused” with Western garments.  Ms. Hunter will also discuss the centuries-old weaving of yak hair, and its use in tents, trappings and temples. She will show textiles in the contexts of Buddhist and shaman rituals, and horse and nomad festivals, where all of the participants, including the horses, are dressed in their finest. 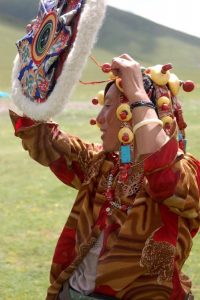 Ms. Hunter is a graduate of UCLA in Art and Cinema, and was a career film editor in Hollywood for nearly thirty years. She has been an avid still photographer since her teens, and since then has focused mostly on adventure travel photography while at the same time experiencing the local textile culture.  Ms. Hunter has traveled to 47 countries on five continents, and has written many articles with photo spreads for HALI magazine, including on her travels in Tibet, Morocco, Myanmar, Syria, Thailand, Turkey and most recently, Iran. 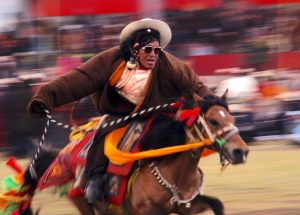 Cheri Hunter- Tibet Adventures in the Eastern Grasslands: Festivals, Fairs, and Rituals on Thursday, January 23, 2020
Reservations are required.
Reservations close at Midnight on Wednesday before the program.
If you are a member, please log in to purchase dinner at a discounted price.