Andre Navarro, is a Freediver, Ocean Videographer and Adventurer. As a teenager, he lived for catching big waves body boarding at Huntington and Newport during the storm swells. In his late 30’s he started snorkeling when there were no waves to catch. While snorkeling at Cabrillo Beach off Point Fermin, he came face to face with a harbor seal. Two eyes stared back at him from the dark shadows of the kelp. That moment forever changed his interest in the ocean and its life and he has been hooked ever since. His interest quickly shifted to free diving. He began locally at Cabrillo Beach and quickly branched out to Laguna and La Jolla. At the same time, he purchased his first GoPro and began creating videos of his adventures. 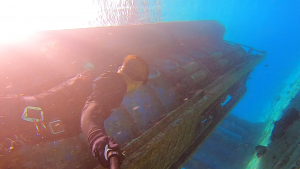 His job offered him the chance to travel to Mexico and Ukraine to recruit and train new employees. While working on the Yucatan, he would travel to Tulum, Isla Cozumel and Isla Mujeres to free dive. While traveling, he fell in love living among other cultures and experiencing the diversity in the ocean and nature. He began to train to become a better free diver, videographer and video editor. During his last two years working, he was traveling so much that he was able to move out of his apartment, sell most of his things, and store the rest. This allowed him to save on bills and free himself to travel long term. In June 2019, he resigned from his job and set out to attempt to make a living traveling and producing dive adventure videos.

Since then, he has been constantly traveling and free diving Southern California- from Los Angeles to San Diego to Baja and the Mexican Caribbean. His next goal is to dive all the spots from Malaga Cove all the way South around Palos Verdes and document the entire experience.

Andre was born in San Pedro California and grew up in Long Beach. He graduated Millikan High School class of 93 and attended Long Beach City College where he earned an Associates degree in Art with a focus of drawing and painting. He served in the Los Angeles County Sheriff’s Department as a Custody Assistant and was promoted to Deputy and worked custody and patrol assignments. After 9 years of law enforcement, he changed paths and began a civilian career in the field of Conveyor Belting and Industrial Machinery Distribution. He performed many functions including fabrication and installation, purchasing, business development, marketing, sales and branch management. During his time in industry, he was sent to Mexico and Ukraine to help recruit and train international employees. It was also during this time that he fell in love with traveling and experiencing other cultures. He began free diving more exotic locations on the weekends. After 14 years, he resigned and began is next adventure.

Below the Surface with Andre Navarro on Thursday, June 18, 2020
Reservations are required.
Reservations close at Midnight on Wednesday before the program.
If you are a member, please log in to purchase dinner at a discounted price.