This program was organized by Neil Mandt, Member #1152. 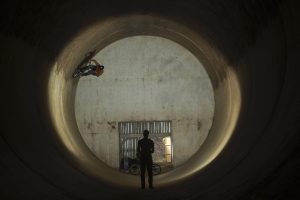 Mike Escamilla spent the last 25 years as a pioneer in the sport of BMX cycling. He has traveled all over the world and has over 60 countries under his belt. He has worked jobs in most of them- everything from silver mining in Bolivia to disposing of unexploded ordinance in Vietnam.  He has set 2 Guinness world records on his bike and competed in the X-games 9 times. He is also a New York times photographer and a member of the Bike Over Baghdad team- the most requested show for Armed Forces Entertainment. He was voted one of Rolling Stones Magazines top 100 instagram accounts to follow. Mike is a true renaissance man. 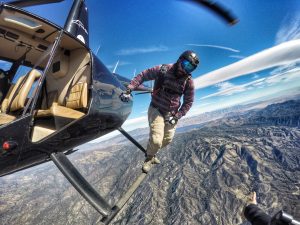 Mike is also a professional Hollywood stuntman. He has crashed and exploded all over the Silver screen in movies like Captain America Winter Solider, American Sniper and Guardians of the Galaxy vol.2. He has starred in, produced or hosted over 100 TV episodes on NBC, TLC, ESPN, MTV, ABC, FUEL, EL REY and more. Mike has done so much badass stuff that he has his own action figure and Activision video game characters. You’ve probably seen him somewhere already, but if you didn’t, just look up- you might see him whipping around the skies in his wing suit or cruising the streets of Los Angeles on his Custom Ural Sidecar motorcycle. 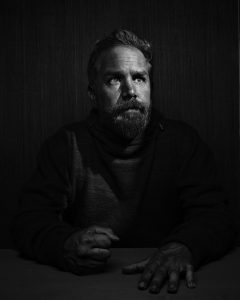 Mike’s true passion is adventuring with his 6 year old daughter Luna. She has the same spark and curiosity in her eyes that drives her dad. From Rock climbing to snowboarding this Father/Daughter duo is heart melter. As a dad, Mike has truly found the thing he was meant to do.

Being the Adventure with Mike Escamilla on Thursday, May 14, 2020
Reservations are required.
Reservations close at Midnight on Wednesday before the program.
If you are a member, please log in to purchase dinner at a discounted price.