Liefia Ingalls spent her childhood feeling physically and emotionally isolated from the world. The sense of self that developed was one of a loner and an outsider. Struggling to form strong connections to her peers, she turned to school at an early age for her primary source of comfort and purpose, dedicating herself to education as a means to a better life. In her daydreams, she was drawn intensely to extreme sports, but lacking the means to participate, she settled instead for hiking and foraging for “treasures” in the vast, empty desert spaces around her home in the high desert of Antelope Valley, CA.

Liefia attended the University of California Santa Barbara, where her studies in Biopsychology and Neuroscience led her on a fascinating quest to understand the relationship between her physical body and her conscious mind.  Gaining sharp insight into the power of physical training to change the brain, she was inspired to explore lifting weights as a means of personal development.  What started as a curious self-experiment would turn into a journey of drastic physical transformation, accompanied by emotional and spiritual development. 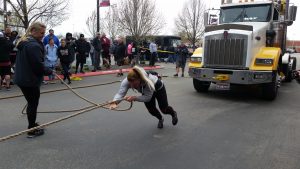 An interest in strength training quickly turned into an unquenchable thirst for strength. Liefia became obsessed with finding the limits of her strength and her fantasies focused on experiencing the maximum expression of her physical power.  Entering her first competition in 2014, she quickly became a pacesetter in the sport of Strongman, becoming a professional Strongwoman in 2016, and winning the inaugural Arnold Professional Strongwoman Championship in 2017.  She also claimed titles as Strongest Woman in the World, Stones of Strength World Champion, and World’s Strongest Woman in 2018.  Along the way, she set multiple worlds records in Log Press, Monster Dumbbell Press, Atlas Stone Load, and Stone Carry events. Competition and teaching opportunities would lead her on adventures to Scotland, Hungary, Netherlands, Germany, and Norway. In 2019, she embarked on a hero’s journey to Iceland, and together with Sandra Bradley, became the first woman on record to lift and carry the famed Husafel Stone. 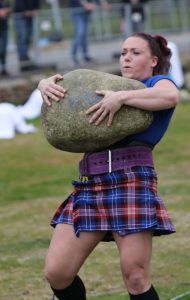 Liefia attributes her self-efficacy and confidence to the process of developing her physical prowess and honing her skills as a competitor.  She also attributes her recent social and spiritual awakening to the unique grouping of outsider culture that exists in niche, extreme strength sports.  Today, she provides specialized strength and coaching development services through her company Unicorn Strength Training, and aims to bring more people into the light of their own self-confidence through achievements in strength.

Lifting Stones to find Strength and Sovereignty with Liefia Ingalls on Thursday, March 31, 2022
Reservations are required.
Reservations close at Midnight on Wednesday before the program.
If you are a member, please log in to purchase dinner at a discounted price.